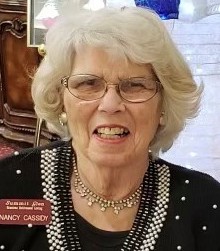 Nancy Jo Cassidy was born 10 June 1931 in Los Angeles, California to Fred S. and Evadna (Busby) Blocksom.  She passed away peacefully surrounded by family on 11 May 2022 in Kaysville, Utah at Whisper Cove Assisted Living.  She lived a long, full life but was not afraid to move on to begin a new journey.

She grew up during the depression years in Los Angeles, California as an only child, surrounded by many older relatives and five cousins, and she outlived all of them. Her parents sacrificed to provide her with the extra advantages of dancing, piano and drama lessons.  She was one of the Meglin Kiddies (the same dance studio where Shirley Temple, Judy Garland and Mickey Rooney had trained), a child prodigy on the piano, and an actress on a continuing radio series.  But she left all of that behind when she graduated (with honors) from Los Angeles High School and enrolled in Pepperdine College (now Pepperdine University) majoring in elementary education and psychology.

In 1951, she married James Patrick Cassidy and shortly after began a family of what eventually grew to three children, Diane, Michael and Kathleen.  She loved being a mother and homemaker and focused on always being there for her children and teaching them correct principles. Although, she never officially became a school teacher or psychologist, she worked as a teacher’s assistant, was very involved with the PTA, volunteered in the elementary school library, taught Sunday School and served as Youth Director at her church.  She also helped organize and served on the boards in several of her local community associations, usually as secretary.

Nancy also loved being creative.  Real estate, houses and their interior design and decoration have always been an area of interest for her, something she inherited from her parents.  She remodeled every house she ever owned.  Some remodels were quite extensive, and she designed or planned many in great detail, including the landscaping.  She was always quite innovative (and frugal) when decorating her homes.  She came up with clever decorating ideas and added distinctive touches wherever she lived.  In later years she also used her creative abilities to design lovely custom greeting cards for her family and friends, with sentiments she wrote and pictures she found online, which she carefully cut and assembled with love.

While going through a divorce during the late 1960s she began searching for a deeper, more spiritual meaning to life.  She was always interested in most things metaphysical and studied many of them throughout her life.  And although she never thought astrology really had any validity, she found after studying and putting it to practical use, that it was an insightful way of understanding herself and others.  She was able to become a helpful counselor to family, friends, and clients through this knowledge.  She was self-taught until 1972 when she found a teacher who guided her through advanced studies in astrology.  In 1975, she, along with her teacher, became one of the twelve founding members of Aquarius Workshops Inc., an organization to promote a positive approach to the science of astrology.  This organization sponsored classes, seminars, and lectures by many well known astrologers. She developed curriculum and was the teacher for many of these classes.

She had always enjoyed writing and began pursuing her interest in various ways, first by writing a weekly column in a local paper, as well as writing a column for her local community newsletters.  And for twenty-five years, she was a contributing writer and one of the editors of Aspects, the quarterly magazine published by Aquarius Workshops.  She authored two books on historical cycles in relation to astrology.  She loved doing research and also had an interest in following political matters.  She loved her country!  Partly because of that love, she wrote an historical novel based upon the life experiences and personal letters of a beloved close relative and her husband.  It is about their love story and also the challenges they faced during WWI and WWII.

In 1987, she left the greater Los Angeles area after about 56 years, to follow both of her daughters to Clovis, New Mexico.  There were many happy times spent there in a small town away from the metropolis where she grew up.  Then in 1996, after Diane and her family had relocated to Utah, she moved to Colorado Springs where Kathleen and her husband (and the majority of her grandchildren) had been transferred with the Air Force.  She resided there until about six weeks ago when she relocated to Kaysville, Utah.  This allowed her to be near Diane and she received wonderful care at Whisper Cove in the short time she was there.  And as was her nature, she was involved in getting her new place decorated and furniture placed just so, even though she wasn’t able to assist physically.

Nancy’s wishes were to be cremated and have her ashes scattered at sea.  The family will hold a private memorial service to honor those wishes at a later date.