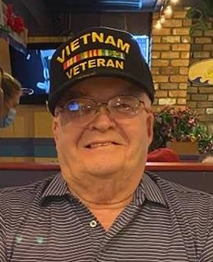 Larry G. Pelz, 79, died at his home in Mesa, Arizona on December 7, 2022. He was born and raised in Blairsburg, Iowa.  He was a true American hero, joining the United States Air Force and serving in Viet Nam as a medic.

In 1971 he married Diane (Noon) Berkenbosch and instantly took to the role of father to three children.  He loved that he and his daughter Susan shared a passion for social justice and Democratic politics.  He was so proud of his son Steve and his work ethic and entrepreneurial spirit and of his son Scott for his hard work as a Master Electrician and as a volunteer firefighter.  He adored each and every one of his children, grandchildren, and great-grandchildren as well as their spouses and partners.

Larry worked in the construction industry most of his life with his career ranging from carpentry to large project management.  He and Diane renovated the old opera house in Blairsburg and operated the Opera House Lounge there for a time.  After their divorce, Larry worked in several states settling in Mesa.  After his retirement, he was the Liquor Department Manager for a Safeway store near his home.

Larry had many friends and a dry sense of humor. He enjoyed the warm weather in Arizona, visiting his favorite establishments, cooking, the Iowa State Cyclones, and watching old westerns. He loved showing off photos of his grandchildren and great-grandchildren.

There will be a private inurnment at the Iowa Veterans Cemetery in Van Meter at a later date.